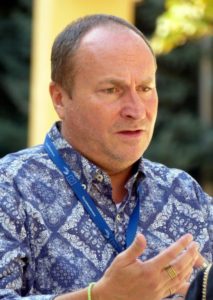 What are your impressions from the last day and a half?

It’s really a very good camp, I have seen some really good beginnings of prototypes and I think that one of the most interesting things is that the number of young people is shown so clearly in the results of the different groups. And that is something that is different from other camps.

Are there any brilliant or stunning ideas you have heard so far?

Yes, definitely. I just listened for a prototype for student learning that has a potential to be a global platform that will really help students and that is something that I will try to push after the camp also.

So, you think that some of the ideas that have been generated here during the camp could be really put into practice?

Oh, definitely. There are some prototypes on very local activities between businesses, different municipalities, academia and etc. that has been tried in other places in Europe and has been successful, and that could easily be put here also. The difference now is that people from the region themselves come up with the idea or use someone else’s ideas, that is much better than having much people from Brussels or the capital coming here and telling what to do.

What is the next challenge for you?

My next challenge is actually to get a good dialogue tomorrow on Monday between your highest level politicians and the citizens of Gabrovo.